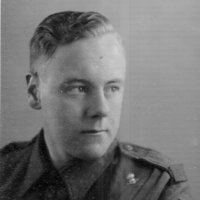 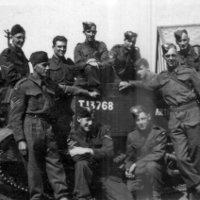 Alex was born in Glasgow in December 1919, the youngest of four children to Alexander and Edith Paterson. With three older sisters, Mary, Sheila and Ellen. He grew up in Glasgow during the 1920's and 30's enjoying trips and family holidays down the River Clyde and to his mothers family on a farm in Yorkshire, where he would ride like a 'King' on the large cart horse called 'Prince'.

When he finished school in 1938, he wanted to become a Marine Engineer, but as there was high unemployment in this profession at this time, he started a Civil Engineering Apprenticeship. In spring 1939, he like many others could see the clouds gathering over Europe, so after walking around Glasgow one afternoon, he joined the Territorial Army, discounting the Highland Light Infantry (the local Regiment) and opting instead for the City of Glasgow Royal Artillery Regiment, as he wanted to chose his unit rather than wait for the conscription system.

This was in late April 1939 and he originally joined 317th (1st City of Glasgow) Bty, 80th (Lowland) Regt, but with the expansion of the Territorial Army he was then posted to its 'Duplicate', 319th (3rd City of Glasgow) Battery, 131st Regt in June 1939. In late August 1939, he and his regiment went on a two week camp, which was in fact to last over six years, as War broke out while they were at camp and he was mobilised in September 1939.

One story he told of this time was that as they marched southwards they used to try and scare the local villagers, with tales of the Edinburgh Regiment that was following on behind them, who were no doubt telling tales to the villagers about the Glasgow Regiments, too!

He then enjoyed what he called a 'Six Year tour of the world at the Army's expense', seeing various parts of England, followed by the South Africa, the Western Desert, Italy, Normandy, Belgium, the Netherlands, all then all the way to Hamburg and Berlin itself.

As he was trained as a Signaller, whilst in 131st Regiment he was attached to HQRA 15th (Scottish) Division, plus 129th and 130th Field Regts RA at various times and in January 1941 to the Divisional Provost Company for a month, before being sent to 37th Signals Training Regt (RA) in February 1942. While the Regiment was based in the Colchester area it had a pair of guns trained on the nearby Abberton Reservoir in case German Seaplanes landed.

This required Observation Posts (OP) being set up in the local church towers, with the one at Peldon being the most common. During one posting there my father and his mates we up the tower setting up when their Officer pointed to a man walking past watching what they were doing very keenly. The Officer then told the men to watch out for the man below as he was most likely a 'Fifth Columnist' was may try to sabotage the OP. That night while the men slept in the church, one of my father's mates was on watch and heard this noise like someone climbing the stairs. After a while he started to think of the 'Fifth Columnist' and how he might have murdered all those sleeping below and was now coming after him. The 'footsteps' were continuing but not getting any closer, so as there was not room to use a rifle in the confined space of the tower the man on watch drew his bayonet ready, but nothing happened.

So he opened the door to descend only to find out that the 'footsteps' were actually the movement of the church clock. The next morning after this story had been shared amongst the OP team; the alleged 'Fifth Columnist' arrived at the church and invited them all to breakfast as he was in fact the village Squire.

Whilst sitting eating a fine breakfast of Bacon and Eggs, my father turned to the Officer and made a comment about 'Fifth Columnists' to him and was promptly told to "Shut up Paterson!"

On another occasion he was on a training exercise, with a large heavy radio. One by one the several of the patrol were 'killed by enemy action' by the Umpires and just had to match along with the rest of the patrol, not able to carry anything more than their own kit. As the number of 'casualties' grew it got to the point where there was just the Officer and one man left to carry the heavy radio, much to the amusement of the 'casualties' who could march along behind enjoying the fine weather.

While 'defending England to the last drop of Scottish blood' as he liked to joke with people, in 1940 he was based at Fingringhoe, Essex, which was across the river from the larger village of Wivenhoe. It was to Wivenhoe that he and his mates used to go to drink and socialise. To cross the river they had to take a rowed ferry which was still in existence until the 1960's and one night he and some of his mates had enjoyed the local pubs and needed to return across the river to the Battery. So they found the Ferryman, who was know locally as 'Truthful Eaves' in another pub and persuaded him to ferry them back. It was a beautiful calm moonlight night and the river was a low tide, so being is a jolly mood the party started to insist that the ferry needed a Destroyer escort to cross the 30 to 40 feet of water that was only about 6 foot deep anyway.

After much jesting with 'Truthful Eaves' he could take no more from these Scots who had dragged him away from his pint and they soon learnt where he got his nickname from when he told them in no uncertain terms what he thought of them. The rest of the short journey was spent in silence!

It was on a visit to Wivenhoe that my father met a young lady, whose mother told him to go find a girl of his own as the one he was chatting to was already married. This he duly did and when he was invited to go and meet the parents, who should open the door, none other than the mother of the lady he has first spoken to. The second young girl was Doris Radford and it was her sister Molly Beeson and mother Emily he has met earlier.

Despite him moving around the UK with the Army and eventually going to North Africa, they kept in touch and in 1943 he wrote to Doris to propose to her and when he came back in 1944 they became engaged. On 23rd July 1945, after being delayed by storms in the Channel for two days they were married in St. Mary's Church, Wivenhoe, where in later to serve as a Church Warden for many years. The were happily married for over 60 years.

In July 1942 he was posted out of 131st Regt, to the RA Depot at Woolwich and he often recalled how he lugged his heavy kitbag up a hill to one gate, only to be told he was at the wrong entrance and that he had to go back down the hill and up the other side in the hot summer sun.

At the end of July 1942 he was drafted to North Africa, sailing in a convoy that stopped in Durban, South Africa. He had a cousin out there whom he met up with a spent time with and also went sightseeing. Whilst sitting with one of his fellow travellers on a park bench they were warned by a local man not to sit there for long as a week or so ago two soldiers had been stabbed in the back by Africans who had crept through the bushes behind the bench.

On another occasion he was in the mess with the other draftees, eating Cheese and raw onions like apples. The locals were amazed as this was not common practise in South Africa, but unlike the UK onions where not rationed so the British troops made the most of them while they could.

Soon they had to leave Durban one of the most enduring memories of this was the Mayoress of Durban, know as the Lady in White, who used to stand at the end of the pier and sing as every troopship left, to wish them well.

He arrived in Egypt on 21st October 1942, two days before El Alamein and was posted to 5th Field Regt Royal Horse Artillery on 20th November 1942 and into Battery HQ of 'CC' Battery, which he served with until the end of war. From his time in the Western Desert until the end of the war he was proud to serve in the 7th Armoured Division - "The Desert Rats", and was member of its memorial association until his death, in 2011.

During the campaign in NW Europe 131st Fld Regt were never too far from 5th RHA as the two units fought there way across Europe and when in 2006 my father looked at a list of the names of the men from the 131st who have died on active service, he noticed many he remembered from his days with the Regt and commented on how many new names there also were. The end of the war saw may father in hospital recovering from pneumonia brought on by the relentless pursuit across Germany and he and a fellow RHA man celebrated VE day in a Guards Mess, as the RHA is part of the Household Division along with Guards.

He returned to 'CC' Battery after hospital and was eventually posted to 74th Fld Regt RA, in 49th Division in preparation for Demob in November 1945, as 5th RHA was regular unit preparing for peace time service. He was finally de-mobbed in March 1946.

After being de-mobbed in 1946 he and my mother moved back to Glasgow so he could to finish his apprentice which he did in 1948. After a further period in Glasgow they moved south again, back to Wivenhoe, with a short period in Scunthorpe on the way, where he spent the rest of his life.

He used to joke that during his first 40 years in Wivenhoe he was known locally as Doris Radford's husband rather than Alex Paterson!

During for most of his working life, Alex Paterson worked for W.C. French, later French/Kier, taking on such projects as demolishing and building railway bridges, runways on numerous airfields, jetties and water towers in East Anglia. During family holidays in the UK he would show me places where he had been posted including a number of locations in Northumberland, including a village hut that was used as a Mess by the unit.

One final twist to his service career was that as he was a reservist he was recalled to the colours in 1952 to 304th Field Regt (Essex Yeomanry) RA, for possible service in Korea, but was found to have a slight hearing loss in one ear, which he blamed on wearing his signaller's headphones for so long, and was released from the Army. He was removed from the Reserve list in June 1959.